Maxwell’s continues to carve out its musical reputation

Maxwell’s continues to carve out its musical reputation 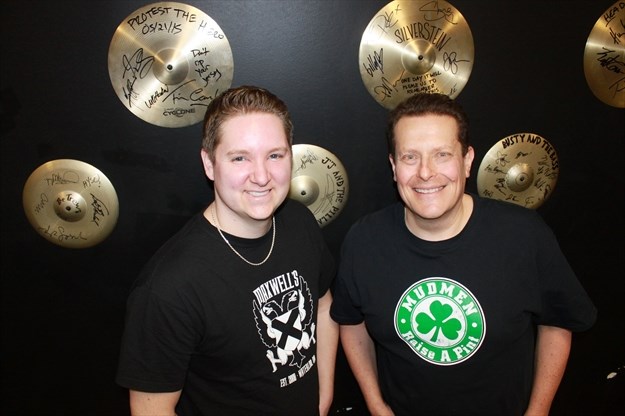 Paul Maxwell and Jay Taylor of Maxwell’s Concerts and Events talk about some of the big name artists they’ve been able to attract since they opened in December 2014, and some upcoming shows. – Bob Vrbanac Photo

Everybody Wang Chung tonight, everybody have fun tonight will be the lyrics that come from the namesake band in that song on June 22 at Maxwell’s Concerts and Events.

And if you don’t want to want relive your dance hall days with Wang Chung you call always listen for the urgency of the Cutting Crew who will share the stage at the same time, as both bands trade songs in front of audience of people who appreciate 1980s and 1990s pop music and lyrics like: “I just died in your arms tonight, it must have something you said.”

In the three years since Paul Maxwell opened the concert hall on University Avenue with partners Jay Taylor, of Morty’s fame, and Steve “Soupy” Campbell it has been a bit easier attracting those nostalgia acts with the new music stars in the industry like July Talk and others.

The live music venue might be in decline in other centres but it’s doing just fine in Waterloo with other stops like the Starlight and the Jazz Room pulling in international talent and Juno and Grammy winners and nominees.

Maxwell already softened that ground with the former Concert Hall right across from the campus of Wilfrid Laurier University, but when the former Dooly’s pool hall in Waterloo came up for sale he joined with Taylor and Campbell to see if they couldn’t create a flex space that could host shows for audiences up to 700 people or more intimate affairs for 200 since they opened in December 2014.

Maxwell said there are always challenges in a new venture, but they feel like they fine tuned what works for the venue and the rosters speaks for itself with shows with Canadian rock legends like 54-40, and Sloan on New Year’s Eve, and an upcoming performance from Matthew Good and his band coming up on March 12.

“I told Matthew Good if the 13 year old me knew I was in the same room with him and booking his show he would think I was the coolest guy in the world,” said Maxwell. “His music meant so much to me.”

Good is a perfect example. He is doing a cross-Canada tour with Our Lady Peace, but he loves the vibe and the experience of the local venue so much he’s doing a one-off show with just him and his band in between shows in London and Oshawa and arena venues.

“We’re a convenient place to stop on the way to London and Windsor,”  said Taylor. “Before everybody used to drive by … but our vision was to attract those acts driving by the region and only seeing us in their rear-view mirror.

“The people behind this operation are stocking the beer fridge or working the floor. They know we care about what’s going on during the show, and they can communicate directly with us.”

Maxwell said it’s about growing that network and also finding out what the community wants. That way they can also deliver a crowd the musical acts want.

That’s how they can bring Steel Panther, an ironic glam metal band from Los Angeles, that parody’s 1980s glam metal with over the top lyrics and an exaggerated stage presence. They play to stadiums of 80,000 people in Europe, and did that right after playing to 700 people at Maxwell’s.

“What an amazing experience,” said Maxwell. “They can be profane and aren’t for everybody, but the people who get them have a great time.”

They’ve also landed other impressive international acts like the just announced performance of Xavier Rudd on June 23. The Australian singer-songwriter and multi-instrumentalist is known for his socially conscious music that explores themes of spirituality, our shared humanity, the environment and Indigenous rights.

It’s those acts that have maintained an audience over a long and varied career that pull in audiences not just locally, but they get tickets buyers from outside the region as well. People still love live music and want to come out and support it.

A personal favourite for Taylor was the performance by Kiefer Sutherland last year, and how gracious and generous he was with the fans, the audience and the people around him. It’s the acts that have a personal touch that really connect to the musical community.

“We have a real cross-section of our community that comes here,” said Taylor.

“And a lot of the acts are crossover acts because they still have wide appeal and have stayed relevant,” said Maxwell. “For an act like Big Wreck that’s been around for 20 year and their new album was charting on the radio you had 19-year-old fans coming out with 60-year-old fans that have been following the band for 20 years.”

They also recognize that its been a great way of adding to the local arts scene and giving people a reason to stay and watch some live shows or come to the community to do it.

“It’s also bringing a level of tourism to the region and we can look at our data history and tell you people have come in from Toronto or even flew in from the U.K.,” said Maxwell. “Their favourite band is the Headstones and they’ve flown in for multiple shows.”

For what’s coming up at Maxwell’s visit maxwellswaterloo.com.